The Windows.ApplicationModel.Appointments namespace in Windows 8.1 (and Windows Phone 8.1) provides access to the user’s calendar. Prior to Windows 10 there were big differences in the APIs as Phone had the existing capability to extend the calendar with app-specific calendars. Now the API is unified across Windows devices but there are some changes to be aware of which will affect existing apps as well as new ones built for Windows 10.

On Windows 8.1 only ShowAddAppointmentAsync existed and this displayed a read-only popup view of the passed in Appointment. With just the option to save or discard the appointment (and ability to select which calendar to save in if you have multiple accounts).

If you call either of those two APIs for Windows Phone on a Windows 10 Mobile device you’ll get a different experience. Now you see a read-only fullscreen dialog showing the details of the appointment but you can tap an edit button in the appbar to fully edit the item. You’ve not lost any functionality as such but it is an extra step to get to an edit screen which is especially annoying if that is what you specifically requested. 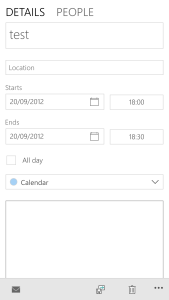 If you call either of those APIs on a Windows 10 PC you’ll get the Calendar app which will show a read-only view of the appointment with the ability to save or discard. There is no edit functionality available at all. If you’re running in Tablet mode Calendar will launch fullscreen, otherwise it just pops up a window over your app. It will be much bigger than the popup used in 8.1.

What’s wrong with this? Given the Calendar application is shared across both device types I’d expect the full version to support editing like the mobile one does. If you click “New Event” in the Calendar app you get an edit screen – this is what I’d expect from ShowEditNewAppointmentAsync. I’d also expect the same edit button on the read-only view.  I’d expect ShowEditNewAppointment to open the edit view by default – otherwise there isn’t any point in having two different APIs which do the same thing. I’m hoping that with Mobile still not finished there is time to fix that, or maybe it just needs a tweak to the Calendar app.